Transparency Market Research delivers key insights on the release liners market in its published report, which includes global industry analysis, size, share, growth, trends, and forecast for 2020–2024. In terms of revenue, the global release liners market is estimated to expand at a CAGR of 6.5% during the forecast period, owing to numerous factors, about which TMR offers thorough insights and forecast in this report. 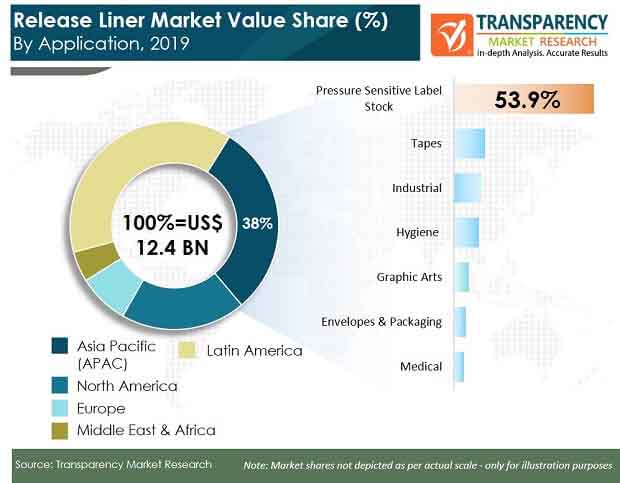 Rising demand for industrial labels is a key driver for the release liner market. Labels account for a substantial share in the overall packaging industry. Release liners constitute a dominating portion of labels, thus the demand for release liners is highly correlated with that of labels and poised to increase during 2020-2024.

Asia Pacific to Remain at Forefront

As per TMR analysis, Asia Pacific accounts for nearly 38% of the global release liner market and is projected to continue its prominence through 2024. China and Japan account for ~40% of the Asian market. However, India is expected to expand at a CAGR of 6.5% during the forecast period. This growth is expected to result from the high demand for labels and tapes in the region thus creating new market opportunities for release liners companies worldwide.

Hygiene is one of the major segments in the total healthcare and medical market, representing about 79% of release liner usage, mostly paper. Healthy growth of this segment is expected to continue, owing to various demographic factors; reflecting potential growth for release liners market over the forecast period. In addition to this, in the medical market, wound care dressings, surgical drapes and medical devices use a self-adhesive laminate featuring a separate silicon-coated release liner. Around 49% of the total release liners market in this segment is being captured by films, representing a strong opportunity for the manufacturers of release liners in future.

In the global market report for release liners, the competition landscape is discussed in detail. Key players profiled in the release liners market are Mondi Plc, Avery Denison Corporation, 3M Company, Gascogne Laminates SA, UPM Raflatac, Rayven Inc., and Loparex Holding B.V. These companies account for nearly 15-25% of the global market. However, several players in Asia are emerging as prominent regional players, these regional players are anticipated to shape the regional dynamics of the market by offering release liners at competitive prices.

A Guide to Scaling Your Small Business

How important is it to regularly train your employees?

Perfect Promotion With the Best Brands

What to Do if You Find Water Puddle in Your House

Knowing Your Rights at Work: A Guide