The global MDO films market is displaying a significant rise in its valuation, finds a new research study by Transparency Market Research (TMR), a leading market research and intelligence firm. The report presents a thorough evaluation of the worldwide MDO films market, taking the key trends and future prospects in consideration. The market segments have also been analyzed in details to offer a deep insight into this market to readers. The business landscape in the worldwide MDO films market is highly competitive due to the presence of a large pool of participants. Avery Dennison Corp., Lenzing Plastics GmbH & Co. KG, Toray Industries Inc., Klöckner Pentaplast Group, NOWOFOL Kunststoffprodukte GmbH & Co. KG, and CCL Industries Inc. are some of the key manufacturers of MDO films across the world. These players are relying on product innovation and technological advancements for their business expansion. Going forward, they are likely to focus more on regional expansion in order to strengthen their position in the global MDO films market in the near future, states the research report.

According to the TMR’s report, the global MDO films market will rise at a CAGR of 4.70% during the period from 2018 to 2026. In terms of material, the polyethylene terephthalate segment has been dominating the worldwide MDO films market and is projected to continue doing so over the forecast period. By manufacturing process, the cast films segment has reported its leadership. Experts predict this segment to retain its position throughout the forecast horizon. Bags and pouches have surfaced as the most prominent application area and is likely to remain so over the next few years. Among end users, the food and beverages industry is anticipated to capture the maximum share in this market in the near future.

Want to know the obstructions to your company’s growth in future? Request a Sample 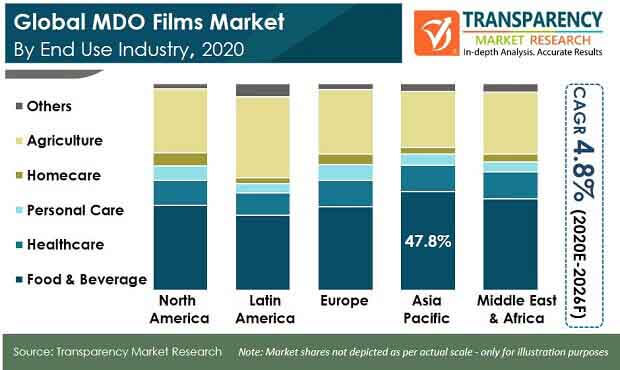 “The significantly rising application of MDO films in product packaging is the main factor behind the growth of the global MDO films market, says a TMR analyst. The increasing demand for readymade or partially-cooked convenience food products has stirred the packaging industry, which is reflecting on the demand for MDO films, since MDO films provide better protection against microorganisms. The excellent machinability of MDO films, which makes them makes them a perfect choice for microwaveable packaging products and freezer bags, is likely to support their sales in the years to come, states the research report.

On the flip side, the volatility in prices of raw materials may hinder the global MDO films market in the near future. The high initial cost incurred in the manufacturing of MDO films is also expected to reflect negatively on the growth of this market over the next few years, notes the market study.

You May Also Like PRNewswire on Industrial Hose Market

Giving Star Map As A Gift